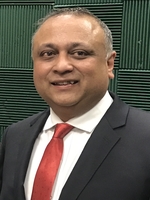 • It represents over 500,000 strong and vibrant Asian-Indians who provide significant grass root support.

• Established in the year 1970, the FIA has blossomed into a commendable organization that has become an effective mouthpiece and mobilizer for the community.

• Over the years, it has also tried to project a truthful and real image of India to the mainstream community and also further the interests of Indians residing in the United States.

• It is in this spirit that, since 1981, the annual India Day Parade is held in New York City to present our progress and unity to the many diversified ethnic communities in this area.

• Vice President of the Edison Cricket Club a non-profit organization of which I have been a member since 2008.

• My passion of serving the community comes from my parents, who served a small town of Gujarat through Lions Club International. I was instrumental as a team leader in coordinating the first ever South Asian Celebration of America’s Independence day “4th of July” in Edison Township by South Asian Community Outreach. I have also served as a Co-Chair in Dushera Festival in Edison Township.